"America's love affair with the automobile soared in the fifties. I sat in the dirt next to Quaker lane and watched traffic for hours on end. I knew every car that went by. Every one. I knew the year the make, the model, and listed the options in my mind. It was a time when a change in style, pointier fins or two tones happened every year and meant absolutely everything. My brother mastered automobiles and I admired that. He understood mechanics and did spectacular things with cars. There was nothing more riveting, more important, more all-encompassing to any male in fifties America than his automobile. Period. Your car was your being. Driving was power and my brother was a master, big time. He had a turquoise-blue '51 Chevy with a white rag top. It was nosed and decked smooth and clean. There were full fender skirts covering the rear wheels and a 'Bermuda' bell that operated with a steel plunger on the floor. 'Bing-Bong'. It was magnificent." 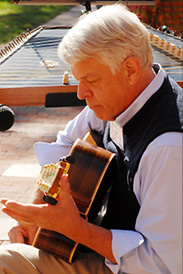 "My crib was next to a window facing Appleton Street in Cambridge, Massachusetts. There is a slight incline coming up from Brattle Street and I could hear the sound of the exhaust as the driver accelerated up the incline to the Highland Street stop sign. As vehicles descended towards Brattle, you could hear the sound of the engine backing-off; most vehicles were standard then, and drivers typically downshifted to save the brakes. Plus, Brewster Street is across the way, with a stop sign at Appleton, so braking and other motorized vehicular sounds made their way to my young ear. I spent the majority of my time standing holding onto the rail, looking out and listening, watching, and counting cars and trucks and motorcycles driving up and down and turning, sometimes parking. Springtime was always exciting because the storm windows came off and I could open the window and hear MUCH better. A bed replaced the crib, same place in front of the window, and there I stayed until I was 16 (1959). So from the time I could stand up in a crib until I received my driver’s license, what I heard and saw every morning and night were motor vehicles, mostly automobiles. The best part was impressing mum by identifying the new 1957 Chevrolet 283 by sound alone."